Showcase of the Z-Wave Weather Station by Qubino

Today, we will be showcasing the Z-Wave Weather Station by Qubino. This weather station, which communicates with Z-Wave, allows you to receive directly weather data on a compliant home automation server.

It’s a new innovation in the Qubino brand, which managed to get well-known in the home automation world, particularly with its flush modules and DIN rail modules which have various features (and that we’ve already shown many times on this blog). The Weather Station shown in this post will be a little different from other peripherals made by Qubino.

Let’s find out about this Weather Station right now!

The Weather Station is shipped with 5 items : two sensors which both measure temperature and humidity, a rain gauge, a wind gauge, and the Weather Station itself, which comes in the form of a little USB dongle that creates the link between the Z-Wave controller and the various weather measuring devices of the station. 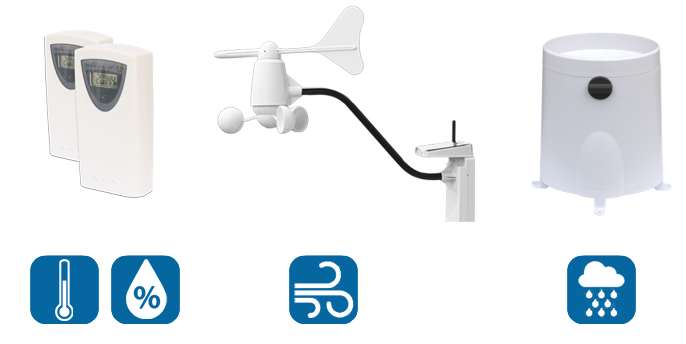 Here is how the 10 readings mentioned before are distributed: 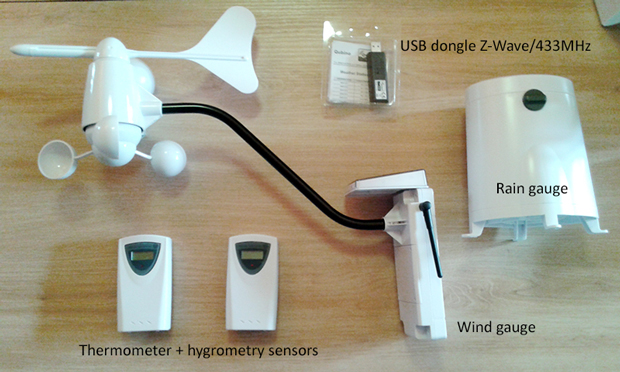 To discover all those elements, we suggest the following video which shows the Z-Wave Weather Station! (note: texts are in french)

In order to use the weather station, you will need a home automation server able to fetch the different readings, and display them with corrects labels, or at least allow you to get the raw data so you can add the correct labels to them.

In a nutshell, the communication goes like this: the USB dongle communicates on one hand with the Z-Wave controller with the Z-Wave protocol (or Z-Wave Plus if the controller uses this version of the protocol) and receives data values from all the 4 sensors and gauges, which all communicates in 433MHz. Thus, the dongle integrates both a transceiver Z-Wave and a receiver 433MHz to receive the values from the sensors. 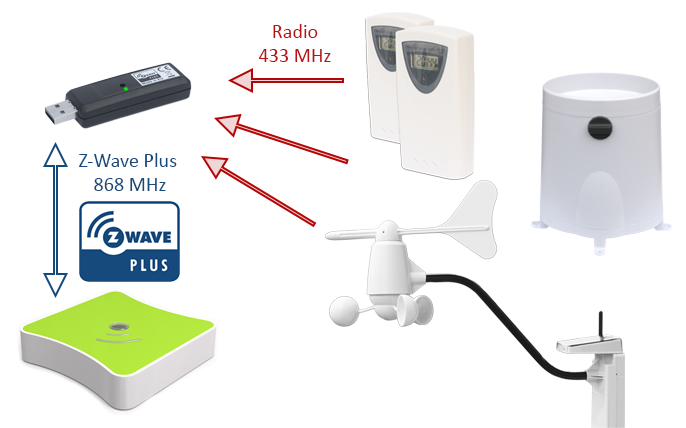 To setup the weather sensor, we first need to install the various items :

Once the four devices are installed, the last step is to plug the dongle on a USB port that can power it. To achieve this, it can be very convenient to have an home automation server that integrates USB ports, such as the eedomus. Home automation systems based on Raspberry Pi or other electronic-card based systems (such as Jeedom Mini) and having free USB ports are also particularly suitable.

As soon as the dongle is plugged, it receives the data from the four sensors and memorizes their radio IDs. Then the dongle starts his auto-inclusion mode, and all we have to do is to also set the Z-Wave controller in inclusion mode, so the weather station appears on it.

After that, the data appears directly in the home automation system and thus are ready to be used!

In case of trouble for the Z-Wave inclusion and exclusion steps, those functions are available directly through a button on the USB weather station dongle.

As soon as the inclusion is successful, the device will transmit data through Z-Wave under various terminals. The data that can be fetched depends on the home automation device used. For instance, you can see below the results we obtain with the eedomus system:

Listing of all the channels at the inclusion of the weather station: 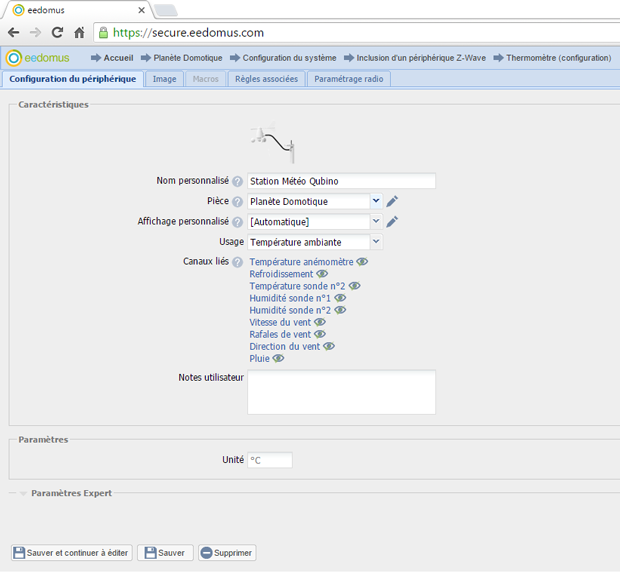 And here are the different values displayed on the UI of the box (the name we picked at the inclusion of the device will display the temperature of the thermo-hygro sensor on the channel 1, while all other values will have self-explanatory names) :

In addition to the data that can be fetched in the home automation systems and used in programmation and scenarios, the device features many customization settings. In particular, it has those two useful features: triggering of other Z-Wave devices when a threshold of gust or a threshold of rain is reached.

The device has an association group, Group 1, to activate associated Z-Wave devices when a gust is detected by the wind gauge.

Example of use: when a strong gust of wind is detected, the system closes the shutter and the awning to keep it from tearing.

The device has an association group, Group 2, to activate associated Z-Wave devices when a rain threshold is reached (an event that is detected by the rain gauge)

Example of use: automatically stop the irrigation sprinklers when it rains. 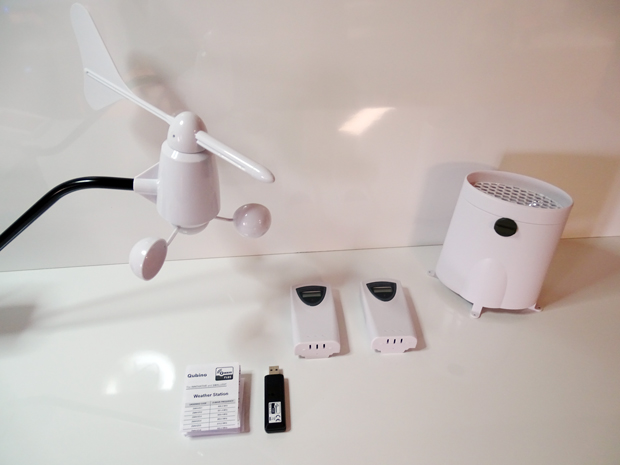 Qubino had the good sense to create a ready-to-use weather station, in which all the devices are directly provided and only need to be powered to be synchronized with the USB dongle and the home automation system. This avoids the purchase of several items that need to be synchronized one by one, which allows a very quick setup of the weather station.

This is also a good way to have a weather station compliant with systems who don’t natively have 433MHz radio communications (such as Z-Wave systems, or DIY systems where no RFXcom was added) and provides enough data to allow interesting uses and programmations in the home automation system, with all the readings available.

We recommend that you check carefully how much data of the weather station can be retrieved with your own home automation system, because the capabilities of the weather station will depend on how well it is recognized by your system. Another point to consider: the storage of the data history from the sensors, directly on your home automation system, or through an export.